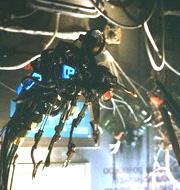 The Xenomorphic species that has come to be known as the ID4 Invader is not dangerous in itself, however its use of advanced technology makes it a very deadly species. Possessed of naturally frail bodies, the ID4 Invaders have compensated for this physical weakness through their use of technology; building themselves both armoured body-suits and massive spacecraft. First encountered on earth on the 4th of July 1996, the ID4 Invaders earned their name. Like locusts, the ID4 Invaders travel from planet to planet, consuming every natural resource before moving on. Their whole civilization, their entire species, travels across the universe in search of new targets in a massive Mothership. The Mothership is estimated to have a diameter of over five hundred and fifty kilometres and a mass approximately one fourth the size of our moon. 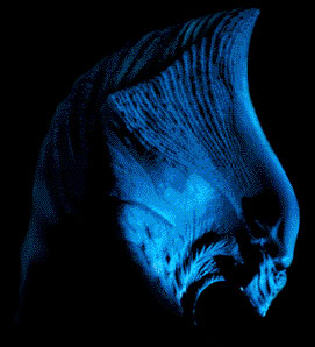 Each Destroyer has the capacity to create a layer of flaming cloud around it, effectively hiding the colossal craft. While still a terrifying site, this “Phenomenon” can be mistaken for a natural occurrence, or at the very least it is enough to disguise the true form and intention of the Destroyer. The lower half of the Mothership can segment, disengaging dozens of large circular sections which extract themselves, twisting away from the larger bilge. Each of these separated segments are enormous in themselves, each fifteen miles in diameter. These are the Destroyers; the ID4 Invaders primary demolition ships. Each Destroyer is deployed to strategic positions across a planet to await activation orders. In order to synchronise their efforts, they use a sequential digital patterns embedded within satellite feed as a countdown signal. Once the countdown signal reaches zero, the Destroyers are in position and activate.

A schism opens at the bottom of the craft and white light spills out. Slowly, this beam of light from the base of the Destroyer intensifies directly on the top of its target building. Suddenly the white light disappears and in a brief moment it is replaced with a blast. A beam of destruction blasts down onto the building, splintering everything there into a billion tiny particles. From the epicentre a wall of destruction grows outwardly, destroying everything in its path. When engaged in aerial combat a Destroyer will open its enormous Attach Bay doors, releasing dozens of small, single pilot Attackers. Each Attacker, like the enormous Destroyer, is equipped with some form of invisible protective shield surrounding its hull. Small and manoeuvrable, each Attacker is very fast and agile, capable of firing tracker bullet-like lasers.

The actual ID4 Invaders are not too dissimilar in their biology from us humans. They are bipedal, with a body, two arms, a head, eyes and ears; breath oxygen and have comparable tolerances to heat and cold. They possess a bipolar digestive system, but no vocal cords or visible mouth. They appear to communicate with each other through some form of extra sensory perception - telepathy. Their eyes are highly reflective, mirrored even, and are set into a broad, flat head which is wide enough to contain their large brains, necessary for telepathic communication. Their limbs, though somewhat similar to our own, appear to have four joints in each arm and leg, the extra joints acting in reverse from the direction of their human counterparts.

Due to the fragile nature of their bodies and limbs, the ID4 Invaders have found it advantageous to construct for themselves biomechanical suits which they wear to completely enclose and protect themselves. Adding great height to the otherwise small aliens, the ID4 Invader lives only within the top head and upper torso sections of the armoured suit. The legs, arms and tentacles of the suit are entirely biomechanical, controlled by the alien within. The eight tentacles protruding from the back of the suit are all fully prehensile and can be used to grip objects as well as helping to keep balance. The extremely tough armoured faceplate of the biomechanical suit can be forced open only with surgical precision. Inside, the ID4 Invader is concealed beneath layers of moist, fleshy growth. Once removed, its translucent skin, bodily fluids, capillaries and muscle tissue are visible. Though extremely vulnerable, the ID4 Invader is still capable of defending itself through the use of telepathy; causing would-be attackers intense mental pain.

A race of giant insect-like life forms inhabit the planet Klandathu and its neighbouring planets. Terrans whom have had contact with these life forms refer to them affectionately as “bugs” due to their insect like traits. Though civilian contact has been limited with this species, many military and scientific sources have procured samples for study. Klandathu Warrior - Starship Troopers The Klandathu Insectoid species is a product of many millennia of evolution, producing many varying genus’s, spanning many varieties of physiological and biological design. The most commonly encountered genus are the Arachnid “Warriors”, which many have likened to military foot soldiers. Standing at least 10' tall and weighing 1200 lbs, they are distinguished by a large headpiece that appears to sit on four thin, spider-like, multi-jointed legs. The head is comprised of large pincer-like ridges that can pierce even the strongest of materials, along with two auxiliary stabbing tusks. Their body is of a chitinous exoskeletal construction, encasing all of the vital systems inside a compact compartment in the rear section, which is covered with a heavily armoured carapace. 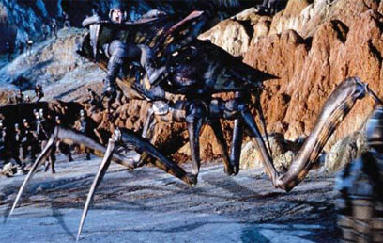 Reports have also come in of Arachnid Warriors which are capable of flight, their wings possessing razor sharp cutting edges. Whether this is yet another genus of Klandathu Insectoids or simply the female version of the Arachnid Warriors is as yet unknown. Klandathu Tanker - Starship TroopersKlandathu Tanker - Starship Troopers Another genus of Klandathu Insectoids that have been encountered are the gargantuan “Tankers”. This genus is similar in physiology to the earthbased Common Beetle, but stands at roughly 30 feet high and weighs approximately 3.5 metric tons. Heavily armoured with a thick carapace covering their entire dorsal body, Tankers are capable of excavating earth, breaking up through the surface to attack. Piercing mandibles are used in close quarter combat and flaming bio-corrosive fluid is sprayed from the top of the Tankers head, which is ignited by a form of biological 'spark plug'. Tankers are seldom seen alone and often accompanied by Arachnid Warriors.

Less encountered are the “Drones” which are the smallest of the Klandathu Insectoids. Their purpose is as of yet unknown, however it is speculated that they are used as gatherers and general workers for the species. Drones are flat armoured Insectoids which stand approximately 1 foot high, by 1 1/2 feet in diameter, and are the least threatening of the species. Recently discovered is the “Brain Bug”. This genus is the rarest of the Klandathu Insectoids but the most dangerous of the species. Approximately 2 metres tall, the Brain Bug is grub-like in appearance, with four sets of eyes and an extendable proboscis used for sucking out brain matter. The internal anatomy of the Brain Bug consists of 80% cerebral enzymes, with the remaining 20% used for the creature's vital functions. Essentially, the entire creature is a walking brain. Little has been discovered but studies have shown that the creature telepathically controls and co-ordinates the legions of Arachnid Warriors, Tankers, Drones and possibly other genus’s if they exist.

The Klandathu Insectoids are not indigenous to Klandathu, but they have been present there for centuries. Their physiology suggests many millennia of interstellar evolution. They are able to colonise other planets (and attack orbiting targets) by firing spores into space, and their bodies are sufficiently sealed for them to survive the vacuum of space. Most incredible of all is their ability to control gravity wells, which has allowed them to throw asteroids towards target planets. How they have come to master this amazing feat is still unknown at this time. Klandathu Warriors - Starship Troopers Aside from the guidance of the Brain Bug the intelligence of the species is questionable at best, as they display very animalistic tendencies, ranging from random shrieking to fighting each other for food. It is believed that the Klandathu Insectoids reproduce asexually with each individual containing pre-fertilised spores, however it is unknown how many spores each may possess.